Yes, I Do Want to be Friends with Star the Reindeer

70 plus in Los Angeles when I leave. 8 degrees in Anchorage when I land.

But I’ve pledged never again to complain about weather warmer than 30 below, so I put on my winter jacket and make sure my rental car has a snow scraper. (It’s forecast to snow every day I’m in Alaska.)

After a few hours of sleep, I wake up early and make the 5-minute walk into downtown so I can put postcards in various coffee shops and the Iditarod store in the 5th Avenue mall. It’s all part of the drill when you are your own street team.

I’m thinking about a million things I have to do when I look up and spot a reindeer. The sun isn’t up yet, so I stop in my tracks, trying to process what I’m seeing. It takes about 30 seconds to realize I’m not dreaming or hallucinating. There really is a reindeer right in front of me, behind a fence near the big “park strip” in the center of town. (It used to be the airport decades ago, but Anchorage turned it into a park when they relocated the airport a few miles Southwest.) 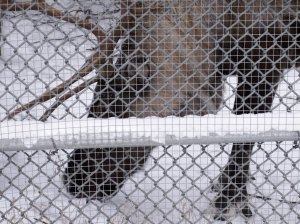 The Anchorage International Film Festival staff and volunteers are all amazing. Hospitality Czar Don sets up an online interview and I set up a bunch of radio and TV appearances to talk about MUSH. I meet a bunch of cool filmmakers in from all over the world, most of the AIFF programmers and staff.

I tell all the Alaskans that I was married above the Arctic Circle in Coldfoot (on the Haul Road) and they all agree that this semi-qualifies me as an honorary Alaskan. I’ll take what I can get.

Lots of press — websites, two TV stations, a radio interview, a couple of print journalists. I drive north of Anchorage listening to the new Ben Folds/Nick Hornby album and get a surrealistic jolt when the song “Levi Johnston’s Blues” starts up just as I enter Wasilla. At the nearly empty headquarters of the Iditarod Trail Committee, I stop in front of the statue of Joe Redington, Sr. for a long time. If it weren’t for him there wouldn’t be an Iditarod and I wouldn’t be here, so I give silent thanks (and then leave some postcards in the entryway). I brought my video camera and a still camera, but they stay in the car. I’ve already got lots pictures and video — and this isn’t the time to get more.

The Opening Night Gala features a screening of The Wild Hunt (adults role-play as Vikings and Elves in the middle of a forest and a love triangle ends with tragic violence) at the Bear Tooth TheaterPub, which features dozens of craft-brewed beers on tap and homemade pizza. As the staff presents clips from some of the films and introduces filmmakers, I look around the place. The Bear Tooth is impressive — huge screen, good sound, and a capacity of nearly 500 including the balcony. This is where MUSH will premiere in less than 48 hours.

After midnight, I discover that my rented Yaris has a warning light to indicate when it’s skidding. Because really, when you’re skidding, what you really need is a warning light to distract you. I drive slowly to the hotel as huge wet snowflakes fall.

Hanging out with a few of the filmmakers and AIFF staff in the hotel bar, I realize I’m exhausted, but thrilled to be back in Alaska. (More to come…)

This entry was posted in AIFF. Bookmark the permalink.